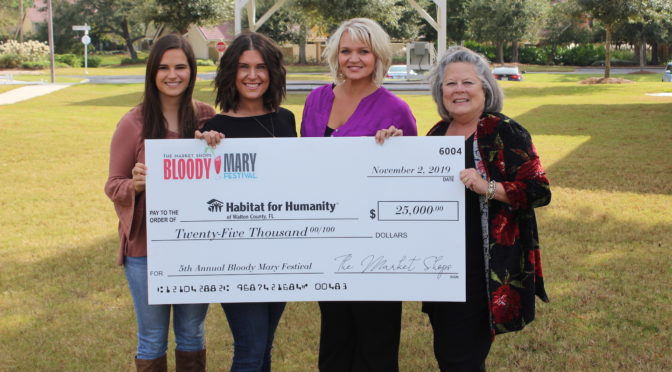 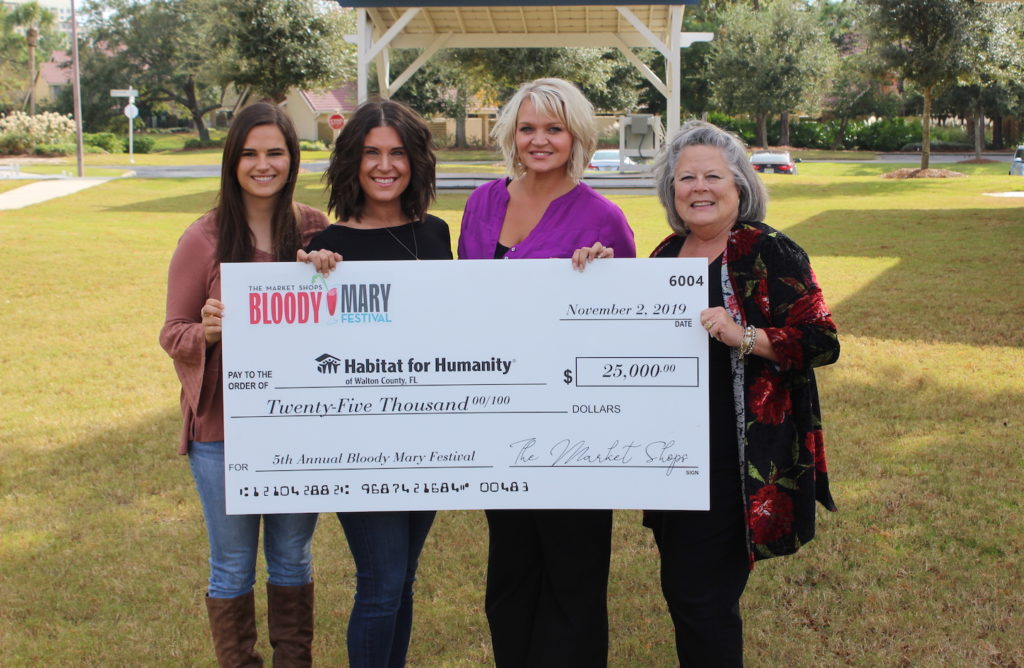 The Market Shops, located at the entrance to Sandestin Golf and Beach Resort, hosted the 5th Annual Bloody Mary Festival on November 2, 2019. The annual event, recently named “Best Local Event” by the readers of Emerald Coast Magazine, raised $25,000 for Habitat for Humanity – Walton County, a record-breaking amount for the festival. The sold-out event featured unlimited tastes of the Emerald Coast’s most creative and inventive Bloody Marys made with Cathead Vodka and served by the finest restaurants and bars on the Panhandle.

Guests were greeted upon arrival with festive tomato-themed balloon décor, courtesy of Mingle, before entering the bustling courtyard and grand lawn, each full of restaurants, vendors, and merchants from The Market Shops. Event goers made their way around the tents sampling each Bloody Mary complete with over-the-top accoutrements in specialty cups provided by Compass Builders of Florida and Visit South Walton.

Upon check-in, guests received a token in order to vote for the coveted People’s Choice Awards for the “Best Bloody Mary in South Walton.” At the end of the event, these votes were counted by Hill Coleman CPA and the following local restaurants were chosen as the winners:

A panel of select food critics and local celebrities also judged each Bloody Mary and selected the following winner as the most delicious and most creative:

All awards were custom made by local artist, Maxine Orange.

There was plenty of food to go around during the festival provided byvarious restaurants located directly within The Market Shops, including Ben & Jerrys, Bijoux Restaurant + Spirits, Clean Juice, Hebert’s Specialty Meats, Maple Street Biscuit Company, and Pizza by the Sea. Apart from the Bloody Marys, guests sipped on local craft brews served by Grayton Beer Company and champagne from the Bubbly Bar, courtesy of Courtyard by Marriott Sandestin at Grand Boulevard and Residence Inn by Marriott Sandestin at Grand Boulevard.

Legendary Marine served a blue “Sea Water” cocktail made with Cathead Vodka, alongside two of their premier boats while Ascension Sacred Heart Emerald Coast served a non-alcoholic “mock-tail” called the “Frozen Shoulder.” The newly added “Boozy Popsicles,” which were also made with Cathead Vodka and served by Swell Pops, were a big hit and offered a refreshing palette cleanser in between sips of Bloody Marys.

Additional funds were raised through a Benefit Brunch held simultaneously with the festival at Bijoux Restaurant + Spirits, where 10 percent of proceeds benefited Habitat for Humanity – Walton County. Jon Smith Subs also donated 10 percent of their sales from that day to the local nonprofit.