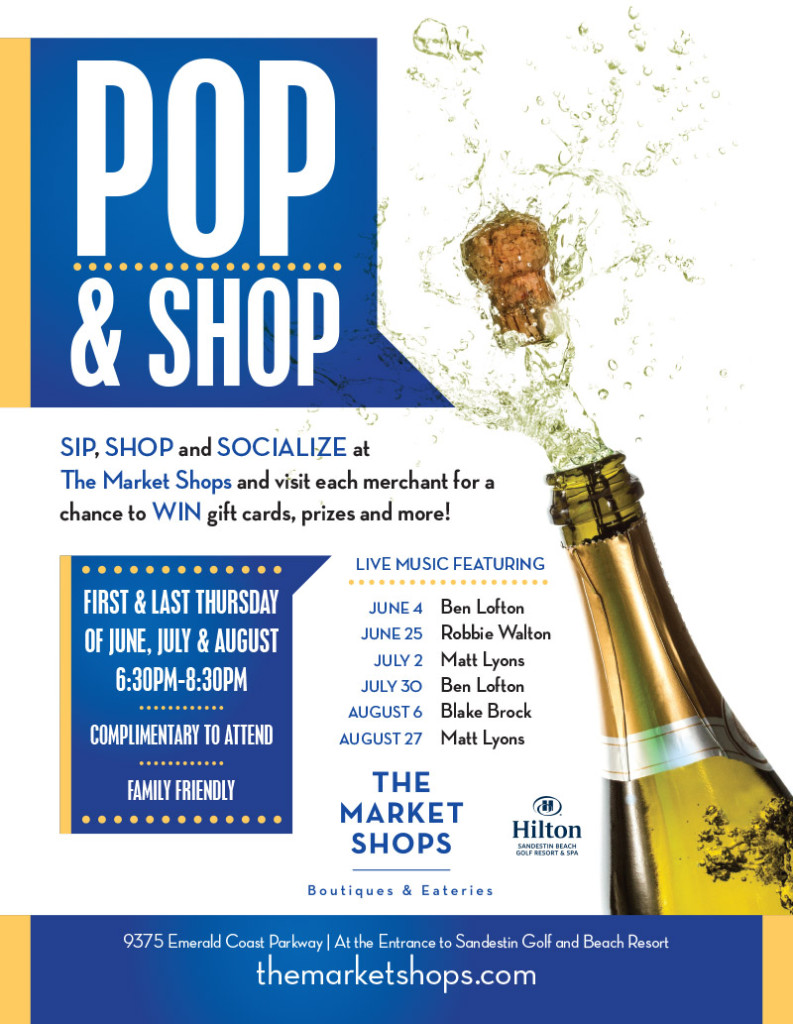 Sip, shop and socialize at The Market Shops and visit each merchant for a chance to WIN gift cards, prizes and more!

Complimentary to attend and family friendly!

Cold-pressed juice and coffee will be provided by Formula Fresh.

The English translation of ‘Art’ debuted on London’s West End in 1996 and opened on Broadway two years later winning both the Tony Award and New York Drama Critics’ Circle for Best Play. It also received rave reviews when it debuted in New York including the New York Post, which described it as “wildly funny and naughtily provocative”.

Newsweek also lauded “Art” saying “Reza is a fiendishly clever writer” and likening the comedy as “ a marriage of Molière and Woody Allen.”

Set in modern day Paris, the story revolves around three friends — Serge, Marc and Yvan — who find their previously solid 15-year friendship on shaky ground when Serge buys an expensive abstract painting. Marc is horrified, and their relationship suffers considerable strain as a result of their differing opinions about what constitutes “art.” Yvan is caught in the middle of the conflict and tries to please and mollify both of them.

Directed by ECTC artistic producer Nathanael Fisher, “Art” will be staged two weekends, March 6-8 and March 13-15 at 7:30 p.m. in suite 15 at the Market Shops, located at 9375 US Highway 98, near the entrance to Sandestin and Hilton resorts in Miramar Beach.

The performance is at 7:30 p.m. with an art gallery preview featuring local Northwest Florida including Andy Saczynski, Mary Hong, Velia Lala, Lori Drew and others prior to each show starting at 6:30 p.m.

“We are fortunate to have a thriving visual art scene here on the Emerald Coast and so it makes sense that we place a high value on it. For this production, we thought it was the perfect opportunity to collaborate with several of our talented local artists to create a special cultural evening that I hope will resonate with everyone,” said ECTC producing artistic director Nathanael Fisher.

Don Goodrum, an actor, director and playwright that has more than 40 years experience. Since moving to Florida in 1999, he has played roles as challenging and diverse as Henry II in “The Lion in Winter,” Max Bialystock in “The Producers” Ebenezar Scrooge in “A Christmas Carol” and the Devil in “The Devil and Daniel Webster.”

Jason Hedden is an actor, director and teacher based in Panama City Beach. He is currently an associate professor of theater at Gulf Coast State College (GCSC) where he is directing the world premiere of “Miracle of the White Leaves: The Musical.” Hedden holds an MFA in acting and devised theater from The Ohio State University and undergraduate theatre degrees from The University of South Florida and GCSC. Professional credits include roles with Seattle Shakespeare Company and Book-It Repertory Theatre. Hedden was last seen on stage in his original solo show, “Resurrecting van Gogh,” produced by ECTC in 2014.

Allen Walker is a local actor from Panama City who teaches Latin at Arnold High School. He was last seen as Scrooge in ECTC’s debut of “A Dickens Christmas.” Other favorite roles include Furtwangler in “Taking Sides,” the title role in Pericles, and Einstein in “Picasso at the Lapin Agile.” Allen is also a company actor with the Seaside Repertory Theatre, where he will soon be seen as Arlequin in “Com’media Robin Hood.”

Tickets are $20 per person. Due to language, the play is recommended for adult audiences. Seats are limited, advance purchase is recommended. To purchase tickets, visit emeraldcoasttheatre.org or call (850) 687-1637.

Link to images and promotional materials for “Art” HERE:

WHAT IS ECTC?: Link to a video of Nathanael Fisher as he describes ECTC’s vision and mission.

Emerald Coast Theatre Company is a 501(c)(3) founded in 2012 by Nathanael Fisher, MFA, and his wife, Anna Fisher. Based in Miramar Beach, Florida, ECTC’s mission is to enrich and entertain the Emerald Coast community through professional and educational theater. ECTC operates year-round with a two-fold mission to provide both educational and professional offerings to the Northwest Florida community. Educational outreach includes after school and home-school programs, touring and staged productions, summer camps, workshops and classes. The professional theater efforts are focused on family-oriented productions, festivals and collaborations as well as acting and improv workshops and classes for adults.

Join us for The Market Shops Ribbon Cutting Ceremony and Grand Opening Celebration on Thursday, November 13, 2014.

Each merchant will be serving delicious apps provided by Bijoux Destin.

Upon arrival, check in at the Fountain Plaza to receive your Boarding Pass and begin your Tour de Market Shops! Visit each merchant and receive a stamp to enter to win two tickets from Southern Airways Express along with gift cards to the amazing Market Shops merchants! This event is complimentary to attend and open to the public. 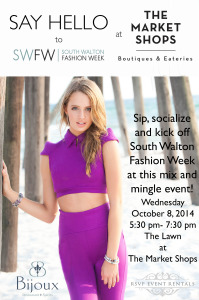 Sip, snack and socialize with cocktails and light appetizers from Bijoux, decor by RSVP events, dancing under the stars to music from Rock the House, prizes and more!

This event is the perfect time to see The Market Shops’ extensive renovation and newest merchants!

RSVP to keep up to date with all the exciting details.

Miramar Beach, Fla – (April 23, 2014) – The Market Shops located at the entrance to Sandestin Golf and Beach Resort has unveiled specific details and a timeline for the extensive renovation that is currently taking place on the property.

Construction on the property began on March 17, 2014 and includes major exterior repairs including: doors and windows being installed to all storefronts facing Emerald Coast Parkway, which will provide easy access from the parking lot and visibility to traffic passing by, as well as redesigned courtyards and walkways. Brick pavers are being laid in the interior common area of the center to create a courtyard that will be the epicenter for events, nightlife, live music and more. The center will also receive cosmetic enhancements including a new façade, stone columns, a new paint color scheme and a complete redesign of landscaping. The lawn on the east side of the property has been expanded and refreshed to host festivals, concerts and other special events in the future. The renovation is scheduled for completion by Summer 2014. In the interim, the local community is invited to the center every Sunday for the Seaside Farmer’s Market at The Market Shops beginning Sunday, April 27, 2014 from 9:00 a.m. to 1:00 p.m.

The Market Shops confirms the addition of several new merchants that will be joining Sunset Shoes, Sandestin Real Estate and Tandestin including a new fine dining concept by the managementof Bistro Bijoux, Sirens at the Beach, a locally owned lingerie, lounge, swim and sleepwear boutique, Favori Gift Boutique, a mini sweet shop, apparel, jewelry and art boutique as well as Market Shops Nails & Spa. Several additional new merchants will be announced in the coming weeks, and many of The Market Shops merchants will be open for business during the renovation of the center.

Built in 1985, this is the first renovation that the 52,000 square foot center has undergone. Owners of the center, OBP Partners of Miami, Fla., acquired the property in 2002, and in 2013 took over the asset’s management duties from the prior operator.

“With OBP Partners’ experienced team now managing and operating The Market Shops, and with the real estate market making a strong comeback, we think this is the right time to revive The Market Shops,” said Ian Schenkman, Vice President of OBP Partners. “We are excited to reestablish the center as a location for the local community to enjoy.”

JPB Commercial Real Estate Advisors is handling all leasing for The Market Shops and has seen very strong interest from local and regional retailers and restaurateurs.  Currently in the pre-leasing stage, the center has reached more than 50% occupancy. Those wishing to inquire about leasing space at The Market Shops should contact JPB agents Tom Watson at 850-527-3524 or Doreen Baca at 850-460-5050.

About The Market Shops

Located at the entrance of Sandestin Golf and Beach Resort, The Market Shops is an upscale, neighborhood-style shopping, dining and entertainment center.  After going through a complete renovation in the spring of 2014, The Market Shops will reemerge as the Emerald Coast’s premier location for unique retailers, specialty boutiques and an array of eateries from casual to fine dining. The East Lawn and Courtyard will feature live music and local events including wine walkabouts, farmer’s markets, concerts and more.  For more information visit www.themarketshops.com or find The Market Shops on Facebook and Twitter.

About The OBP Partners

We’re pleased to announce the renovation of the Market Shops, Destin’s historic shopping center. The renovations will be completed in Summer 2014. Please visit our boutiques and eateries, open during construction.

The market shops is under construction

There are no upcoming events at this time.